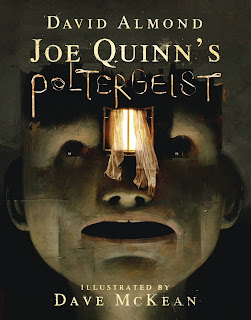 JOE QUINN’S POLTERGEIST is a graphic novel that doesn’t actually revolve around Joe Quinn, but instead is centered on a young teenage boy named Davie. Based off the language and some of the places mentioned, I’m guessing the story takes place in England. Joe Quinn is a strange kid whose father is in jail and whose mother apparently lived a wild life before Joe was born. One day, Joe shows up to pester Davie and Davie’s friend Geordie. Davie and Geordie are watching some girls play tennis. Joe shows up and tells them there’s a poltergeist in his house. He asks Davie and Geordie if they want to come see. Davie doesn’t want to, but Geordie does. After their visit, Davie begins to believe there really is a poltergeist in Joe Quinn’s house, but Geordie thinks he’s kind of daft and tells him it was just Joe throwing things around. As the story progresses, the reader learns that the real poltergeist is within Davie as he still hasn’t come to terms with the death of his sister. He starts conversing with a local priest, but things really don’t go as expected.

Based upon the advertising, I had assumed that JOE QUINN’S POLTERGEIST was going to be a graphic novel story about things of the supernatural and some young kids. Turns out, it’s not. It’s a “realistic” graphic novel, meaning that the story is firmly grounded on terra firma with no attachment to anything supernatural. The poltergeist in the story isn’t a supernatural ghost. Instead, it’s the inner turmoil Davie feels about the loss of his sister.

Also based upon the advertising, I thought this was going to be a children’s graphic novel. It is not suited for children at all. Teens might enjoy the book. However, while the main characters are teens, the story is really an adult story.

I was really disappointed by JOE QUINN’S POLTERGEIST. It is true that the story wasn’t what I expected. However, putting that aside, the story itself really isn’t that great of a story. There really isn’t much of a story at all. In the end, instead of knowledge, Davie basically learns that everything is meaningless and there is only us. There’s no hope. There’s no redemption. There’s no real ending. In tone, the book reminded me of a Raymond Carver story. If you enjoy depressing and dreary fiction, seeped in realism, then you might enjoy this book. 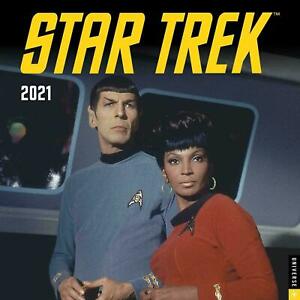 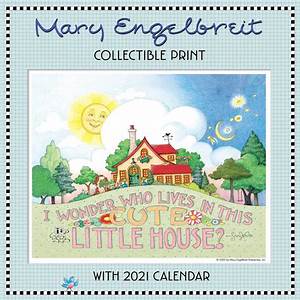 Instead of promoting this as a calendar that comes with a print, the MARY ENGELBREIT 2021 COLLECTIBLE PRINT WITH WALL CALENDAR is a print that comes with a 2021 calendar. The print is a 9” x 12” print that is suitable for framing. The calendar that features 16 months (September – December 2020 are included on one page of the calendar).  Normally, having the last months of a year on the next year calendar would be a benefit, but 2020 has been so bad, you might just want to ignore that section all together and rip it out once January 2021 is over. The images are full of the sweet and homespunny paintings Engelbreit has become known. My favorite images are the one for July (which features a little boy and his dog sitting outside next to the front porch decked in American flags) and November (which reminds us to “Give Thanks for Blessings Already on Their Way”). Fans of Mary Engelbreit will probably really enjoy this calendar as a gift, but it’s also suitable to give to anyone in general. 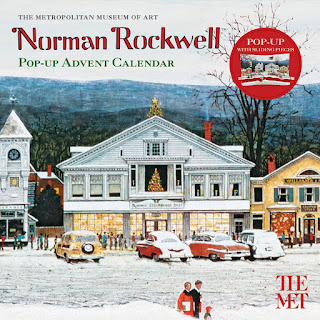 When I was a kid, my Mom used to have a really cute Advent Calendar that we used each year to count down the days to Christmas. I’ve always had a soft spot for them. I’ve also been a lifelong fan of Norman Rockwell; he’s my favorite artist of all time. So, the METROPOLITAN MUSEUM OF ART NORMAN ROCKWELL POP-UP ADVENT CALENDAR is the perfect item for someone like me. The calendar itself unfolds into a rather large display of Rockwell’s painting “Stockbridge Main Street at Christmas.” The windows of the calendar are 2 inches squared and each one features a different Norman Rockwell painting. There are also some slide action pieces. Overall, it’s a rather impressive Advent Calendar filled with the art of Norman Rockwell.

Email ThisBlogThis!Share to TwitterShare to FacebookShare to Pinterest
Labels: calendar

TAKE IT AWAY, TOMMY by Georgia Dunn 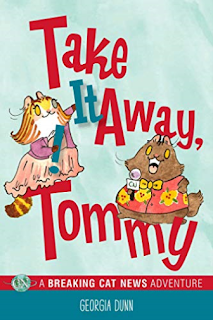 The cats from the comic strip “Breaking Cat News (BCN)” are back in this third collection of comics. This collection appears to be a collection of strips that were published from September 3, 2015 – February 15, 2016. This collection features the regular cast of feline reporters (Elvis, Puck, Lupin, and Tommy), but also introduces several new characters, so of the cat variety, some not of the cat variety. These include Burt, Baba Mouse, Sophie, Tillie, and the Robber Mice. TAKE IT AWAY, TOMMY includes a really good Halloween storyline (that features some ghosts) as well as a Christmas story-line where Puck loses something very special to him.

I’ll admit, I’m not a huge fan of “Breaking Cat News.” It’s a very cat-specific comic and I’m really not the big a fan of cats. However, I do read it in the paper every day. With the expansion of characters and a greater awareness of the larger role, the strip has improved, in my opinion.  I particularly enjoyed the Halloween storyline.

YUGE! 30 YEARS OF DOONESBURY ON TRUMP by G.B. Trudeau 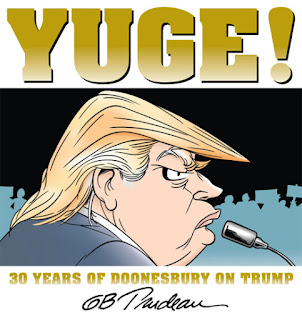 Before Donald Trump became seriously interested in politics and ran for office as a Republican, he was a darling of the left. Garry Trudeau was one of the few from the left-side of the political spectrum who has never really shown much liking for Trump and that can be seen in reading YUGE! a collection of 30 years of “Doonesbury” strips that feature or revolve around Trump.  In reading the strips, one can see that Trudeau never really cared for the man. However, the tone in how Trudeau characterizes Trump changes over the years. The earliest strips in the collection feature Trump more as a rich and sleazy, buffoon. He’s portrayed more as a cartoon character than a real person and it’s obvious that while the writer doesn’t like the man, he just sees him as character that can’t really be taken all that seriously. This portrayal continues through most of this collection.

In fact, while the book tries to give the allusion that the writer took Trump seriously early on as a legitimate political threat, the collection illustrates elsewise. The last strip in the book is from April 2016 and even at this point in time, while it appears likely that Trump might have a legitimate chance of winning the Republican nomination, the artist doesn’t take Trump seriously. Instead, he takes the boisterous bluster that Trump speaks and promotes and augments it by several degrees. I think in doing so, Trudeau’s intention was to make Trump appear and even bigger cartoon than he had ever before featured him and that there was no way possible he could ever become President of the United States. Looking back at it now, it kind of illustrates the major error of the left: they never really took Trump seriously. The issue is now reversed as since the day after the election, that side of the political aisle seems to take Trump way to serious about everything, which is probably a mistake, too. Life’s all about balance and there’s very little balance in YUGE!

Overall, YUGE! is a somewhat humorous and interesting read because it shows what the political left thought of Trump before he became a serious political contender. Outside of that, fans of “Doonesbury” might enjoy the collection, but because of the limit in scope and topic, perhaps not.