TRON: BETRAYAL is a graphic novel that attempts to bridge the gap between TRON and TRON: LEGACY. The book explains why Flynn created Clu, what happened when the ISOs first appeared, and why Lora Baines is not in TRON: LEGACY. 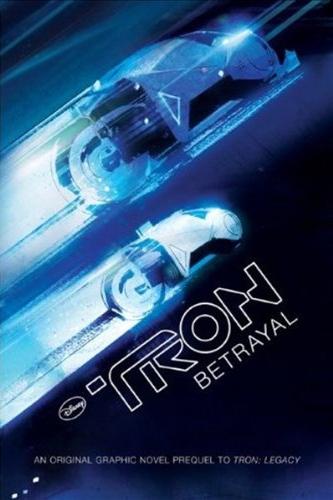 However, TRON: BETRAYAL isn’t a perfect fit between TRON and TRON: LEGACY. For instance, in TRON, it’s made completely clear that the MCP was a creation of Dillinger and not Flynn.

I found the story in TRON: BETRAYAL to be okay, but rather lackluster. It has more emotional depth than TRON: LEGACY, but it lacks the character development and powerful storyline of TRON.

Personally, what I disliked most about the book were the illustrations. There are many panels in the book where the reader cannot decipher what is happening. Characters that are at odds are dressed the same and when they combat, you can’t tell the difference between them. Not only that, but these panels are often arranged in a way that resembles the shaky-cam, quick-cuts that tend to be a favorite technique of young, inexperienced filmmakers. In those movies, the cuts are so quick and unsteady that you can’t clearly follow the action of a particular sequence. This style of storytelling has crossed over into comics and is prevalent in several places in TRON: BETRAYAL.

Overall, though not terrible, TRON: BETRAYAL is a lackluster entry into the Tron franchise that has some occasional gorgeous panels that are soon followed by a shaky-cam, quick-cut sequence that makes no sense. As with the movie TRON: LEGACY, fans of the original TRON will probably be disappointed by this story, but fans of TRON: LEGACY will probably enjoy it and not even notice the discrepancies with the original film.
Posted by tvtv3 at 3:41 PM