Before reading ANIMAL MAN, VOL. 1: THE HUNT, I had never read the series before. However, I was familiar with the character and Grant Morrison’s run of the series. For instance, I know that Animal Man is, perhaps the most meta-comic published by a mainstream comics publisher (even more so than Marvel’s Deadpool; Deadpool breaks the 4th wall a lot, but at one point in his life Animal Man knew his life was just a comic book). I also knew that Animal Man (aka Buddy Baker) isn’t the usual crime fighter. He tends to fight social issues as well as injustices against animals, not just people. He’s also happily married and has kids. Also, unlike many other superheroes, his real identity isn’t a secret. Knowing what I knew about the character, I was looking forward to reading ANIMAL MAN, VOL. 1: THE HUNT. 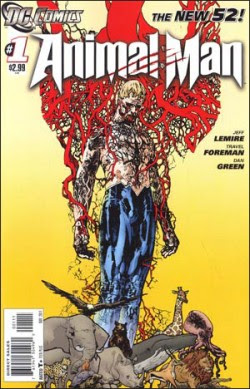 This collection begins with an article that looks like it was taken directly out of The Believer magazine about Buddy Baker, aka Animal Man. It turns out that Buddy is reading about himself in the magazine. I’ve read The Believer and the article looks exactly like the interviews that appear in it. Buddy is starring in an upcoming movie and is doing a lot of publicity to promote it. He hasn’t done in crime fighting in a while and decides to do so that night. He saves the life of a child that’s used as a hostage in a hospital. Afterwards, he notices that his eyes are bleeding. Later, strange red markings/tattoos begin appearing on his body. Not only that, but his daughter, Maxine, is exhibiting superpowers of her own. Something is Rotten in the state of Denmark and Buddy and Maxine are in the middle of it. The two of them are being hunted by three grotesque creatures known as the Hunters Three. They seek to devour, absorb, and turn Buddy and Maxine to their own bidding.

The artwork for the story is fantastic. However, much of it is rather grotesque and gory. Until recently, ANIMAL MAN was mostly a Vertigo comic, a DC brand devoted to more horror-type stories. Much of the artwork reminded me of the old EC Comics. There’s lots of blood, internal body parts, resurrected animals, and zombiefied creatures. Many readers won’t have a problem with any of this, but it might be for younger readers and those who have no knowledge of Animal Man.

Overall, the story is a good one. I like the idea of Maxine having supernatural abilities and having to be trained and tutored by her father. Despite being a superhero, Buddy Baker has first and foremost been a fairly average man that is devoted to his family.  It’s just that he doesn’t live a normal life (in many ways the character reminds me of THE GREATEST AMERICAN HERO and what life for Ralph Hanley would have been like later on). The fact that he has to now train and tutor his daughter whose powers are far greater than his own adds an interesting twist to the dynamic. I also like the idea of Animal Man have to team up with the Swamp Thing to fight a villain.

With that said, I really don’t like the idea behind The Rot and all that it represents. The Rot seems too much like a villain from a bad science fiction-horror movie. It’s actually kind of hokey and with all the events that happened with the “Blackest Night” and “Brightest Day” storylines, the entire concept seems out of place. It’s as though there’s too much magic and not enough science.

Nevertheless, ANIMAL MAN, VOL. 1: THE HUNT is an engaging story and one that’s worth reading.
Posted by tvtv3 at 5:45 PM