In WONDER WOMAN: THE HIKETEIA, a young woman named Danielle Wellys is caught by Batman after she has killed another man. Apparently Batman has been following her for some time and this is not her first victim. She’s eludes being captured by Batman and makes her way to the home of Wonder Woman (Diana Princess of Themyscira) whom she begs supplication. Diana agrees, not knowing of the deeds that Danielle has committed in the name of justice, but that were actually done with vengeance. Not long after, Batman arrives on the scene and Diana finds herself in a quandary. She has given her word to Danielle and sworn an oath, an oath that cannot be broken. On the other hand, Batman wants to bring Danielle to justice he intends to capture her, even if it means fighting with Diana, one of his oldest friends. 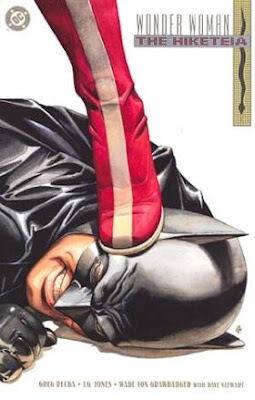 That is the plot, but the heart of the story is an examination of how Wonder Woman thinks. In addition it is a crucible of tempering between various opposing forces: Diana’s traditional beliefs versus her obedience to modern laws; the value of a promise versus the value of a dear friendship; the past versus the present; etc.

The story is virtually a Greek tragedy told in graphic novel form. The Furies are the Chorus and they appear throughout the story and occasionally interacting with it. Wonder Woman is the protagonist who finds herself in a difficult dilemma, brought about by a choice that she has made. Like all Greek tragedies, the entire tone and atmosphere makes it clear that this isn’t a story that’s going to have a happy ending.

There are a couple of negatives with WONDER WOMAN: THE HIKETEIA. First, is that the Diana portrayed in this story doesn’t fit with the standard norms of her character. Some of the basic scenery is there, but the woman behind the stage seems quite different from the Wonder Woman of tradition and comics past.

The second negative is that this is a far darker story than many Wonder Woman stories. Several people die and there’s quite a bit of blood. This fits in with the overall device of this story being a Greek tragedy. However, it’s another element that’s atypical of Wonder Woman tales and is likely to turn some fans away.

When I first read WONDER WOMAN: THE HIKETEIA, I didn’t like it. It was the Wonder Woman I was familiar with and it was far too violent for what I wanted to read. Recently, after having studied some Greek mythology and re-read some of the Greek tragedies, I re-read WONDER WOMAN: THE HIKETEIA and saw it in a completely different light. I actually enjoyed the story more the second time and had a far greater appreciation for it.

WONDER WOMAN: THE HIKETEIA is a good story. Wonder Woman fans will probably be evenly split between those who like it and those who hate it. Batman fans will be disappointed that his role is smaller than expected. Those who like comic books and Greek mythology, will probably enjoy the story. However, there are some who will be offended by the violence in the tale. It’s not the usual Wonder Woman fare, but it’s worth examining.
Posted by tvtv3 at 1:44 AM