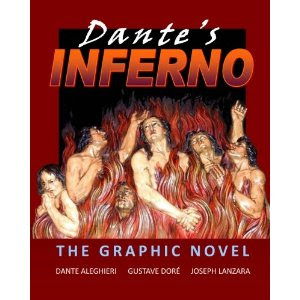 Dante’s THE INFERNO is one of those pieces of literature that has had a massive impact upon Western culture and its impact can be seen and felt even today. However, it’s also a work that intimidates many people. Using Gustave Dore’s famous black and white illustrations of THE DIVINE COMEDY and some of the dialogue taken from the text, Joseph Lanzara has molded together a work that is both breathtaking and highly accessible to a modern audience. Lanzara has streamlined the narrative, but readers who are new to Dante or THE DIVINE COMEDY will come away with some of the key points of the story as well as an appreciation of the vivid imagery contained within Dante’s famed story after reading this graphic novel. DANTE’S INFERNO: THE GRAPHIC NOVEL makes an excellent introduction to THE DIVINE COMEDY, but it is also a work that students and fans of the text will probably enjoy and appreciate.
Posted by tvtv3 at 10:50 PM

Good review! I just got this in the mail the other day and am looking forward to it.