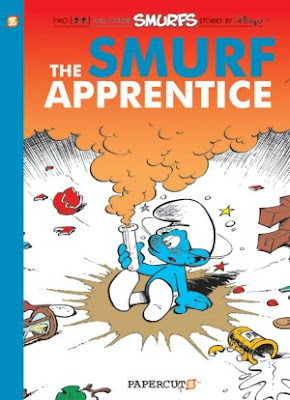 This collection of Smurf comics includes three different stories. The first is “The Apprentice Smurf” (this collection is titled under a slightly differed name). The second is “Smurf Traps” and the third story is “The Smurfs and the Mole.”

In “The Apprentice Smurf” after watching Papa Smurf make a potion, the Apprentice Smurf wants to be a potion-maker, too. However, Papa Smurf tells him he’s too young, but they’ll talk about it later. The Apprentice Smurf can’t wait and sneaks into Papa Smurf’s house. His plan is foiled, but the other Smurfs play a prank on him. Dejected, he decides to sneak into Gargamel’s house and steal one of the spells from his spell book. What follows is a disaster and a valuable lesson in patience and listening to one’s elders. In the cartoon based on this comic, the Smurf apprentice is Clumsy Smurf, but he remains unnamed in this comic.

“Smurf Traps” is a much shorter comic. Gargamel uses a variety of specially designed traps to capture all the Smurfs. However, Papa Smurf escapes and plans a rescue mission.

“The Smurfs and the Mole” is another short comic. Brainy Smurf has his glasses stolen by Jokey Smurf. Meanwhile, a near-sighted mole pops out of the ground in the middle of the Smurf Village and destroys a house. Papa Smurf recruits Handy Smurf and Jokey (disguised as Brainy Smurf) to follow the mole and find out why it appeared in Smurf village for no apparent reason.

THE SMURF APPRENTICE is an enjoyable read. They aren’t the best Smurf stories, but they aren’t bad ones either. It’s a short collection that makes for a quick read. This book is a must have for a Smurf fan’s collection. Also recommended for younger children who enjoy comic books.
Posted by tvtv3 at 11:28 PM

Man, I can't believe the Smurfs made a comeback. I used to love reading these comic books back in the '80s!

Papercutz is reprinting all the old Smurf comics. They've been out of print for awhile.