I enjoyed the novel JURASSIC PARK and loved the movie. When the film was first released in 1993, the film far exceeded expectations and it was one of those rare instances where the movie was better than the book it was based upon. Therefore, when I learned that IDW had won the rights to publish a series of new comics for the series, I was excited. 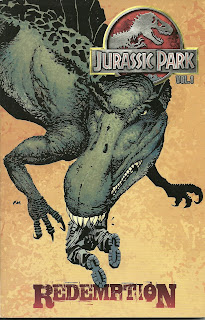 JURASSIC PARK: REDEMPTION is set 13 years after the events of Jurassic Park. Both Lex and Tim are grown up and are successful entrepreneurs in their own right. Lex is a business celebrity and one of her many projects has been developing a renewable food crop that will solve the world’s hunger problem. Tim, meanwhile, has been secretly breeding dinosaurs in an underground facility in Texas. He wants to build a new Jurassic Park that consists of only herbivore dinosaurs. However, unbeknownst to Tim, one of the employees at the facility is actually a spy hired by Tim’s largest secret backer and has been raising some carnivorous creatures, too. The time comes to begin moving the creatures to their new home, but then one of the creatures escapes (or is released?) and begins causing destruction all around the area.

I was excited that Lex and Tim were back, but JURASSIC PARK: REDEMPTION is a huge disappointment. The story jumps around all over the place and it’s incredibly difficult to follow what exactly is going on. There are times when a person is attacked by a dinosaur and left for dead and then the story immediately switches in the next panel to a completely different scene. Later it’s revealed that the person who died earlier, didn’t really die, but just had a flesh wound. Then there are other times when a person is killed, but the next panel cuts away to a completely different scene then it’s later revealed the person really was killed. There are characters who appear in this story that died in both the books and movies of Jurassic Park. Then there’s the artwork. It’s not really good. There’s no real distinction between the different dinosaurs other than in size. There are sections where you see a dinosaur and you think it’s a carnivore when it’s actually an herbivore and vice versa. I was also really distracted by the noses of the people. I’m not sure what it is, but the noses of the human characters just don’t fit well with the rest of their faces. The noses look like they’ve been penciled in.