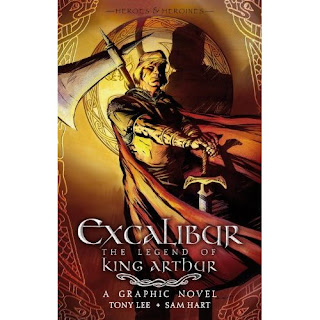 In this graphic novel version of the legend of King Arthur from Tony Lee & Sam Hart, Arthur isn’t just a regular mortal man, but instead is part fairy and is chosen by the good fairies to be King of Albion (England). However, his half-sister, Morgana, is taken by the evil fairies and raised in the black arts. She comes to despise Arthur and all that he stands for. Unlike many of the stories we read about Arthur, in this version he is fully aware of his familial lineage. However, he begins to doubt the existence of the wizard Merlin until Merlin appears just before Arthur sets off to face the evil King Ulrich. Merlin sends Arthur away to the good fairy realm of Albion where a year is as a few hours in Albion. While there, Arthur falls in love with Vivianne, the Lady of the Lake. He ends up staying in Avalon for two years before returning to face Ulrich in Albion, where only a day has passed. Thus begins Arthur’s journey to becoming King.

I had been looking forward to reading EXCALIBUR: THE LEGEND OF KING ARTHUR. I enjoy the legends of King Arthur and was excited to see how this updated version would be. I was disappointed. I don’t mind trying to update the stories of Arthur. However, EXCALIBUR does more than just update the stories. It changes the very essence of Arthur. Instead of the man who would be king, he becomes the fairy man that’s destined to be king. The mystery (and humor) of some of the tales are explained away through faire knowledge (aka magic). Arthur’s love for Guinevere and the betrayal of Lancelot and Guinevere are easily forgiven because in this version of the story, Guinevere was not really Arthur’s true love. That’s just one example of how the Arthur legends are distorted.

I was also disappointed by the artwork. I had seen Sam Hart’s work in an earlier graphic novel, OUTLAW: THE LEGEND OF ROBIN HOOD. In that book, the illustrations were much too dark. The illustrations in EXCALIBUR are better than in OUTLAW and there isn’t as much shadowing and dark colors as there was in that book. However, the expressions and physical positions of the characters in EXCALIBUR are bland, dull, and often emotionless. EXCALIBUR is supposed to be an exciting updating of the Arthur legends, but it’s difficult to become excited about a story when one of the most exciting panels is seeing a withered Arthur after part of his “life force” has been taken from him by an evil fairy. There is so much more of the story, but the illustration don’t do the story justice.

Overall, EXCALIBUR is a disappointing update of the King Arthur legends. The story suffers from giving the tale a fairy subplot and the actual graphic novel itself suffers from mediocre illustrations.