A few years ago when I had to teach my first high school freshmen English classes, part of our curriculum included excerpts from THE ODYSSEY. While the textbook version sufficed for the students, I wanted to read a translation of the entire book and not just excerpts. After doing some research, I chose the Penguin version translated by Robert Fagles. The main reason I chose the Fagles’ translation was because I wanted a version that I could read quickly so that I could stay just ahead of my students and their assigned readings from the textbook. Under different circumstances, I might have chosen a more literal translation: as a student of the English language, I don’t mind books that take longer to read and comprehend. However, given the circumstances at the time, Fagles seemed the best choice. 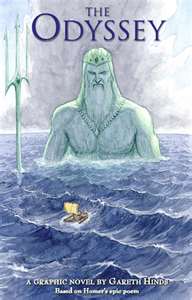 Fagles’ translation of THE ODYSSEY has been trounced by many scholars and critics as taking far too many liberties and contains very little of the original meter and rhyme of the original Greek. Fagles discusses some of his choices and his attempt to find temperance between staying true to the original meaning while updating the language so the text is understandable by a common, post-modern reader. Though I don’t know much Greek myself, there are certain passages that I disagreed with Fagles choices. For instance, the use of modern phrases such as “cease and desist” that are peppered throughout. I’m all for trying to translate an ancient text into language that a modern audience will enjoy, but choices such as that are too much to the extreme of readability. The very concept of some of those modern phrases would be nothing like the idea in the original language.

However, despite Fagles’ choice of readability over poetry and literal meaning, I enjoyed his translation of THE ODYSSEY. When I read it, I was able to keep pace ahead of the excerpts my students were reading from their textbook. Had my students been upper class students or college students, this would be a translation that most of them would have been able to understand best. This really is a translation for a modern audience.

Fagles’ translation also includes an introduction by Bernard Knox that provides a context of the story and examines some of the major themes of the story.

As for the story itself, Homer’s THE ODYSSEY is one of the most famous stories in Western literature. It follows Odysseus after the Trojan War and his long quest back home. Plagued by Poseidon and the gods who had supported the Trojans and beleaguered by his beloved, but often inept crew, Odysseus’ journey home to Ithaca takes another decade. Meanwhile, his faithful wife Penelope fends off an army of suitors for her hand and young prince Telemachus is sent on a mission by Athena to uncover new about his father. There’s also Cyclops, sea monsters, drug-inducing flowers, beautiful witches, and lots of fighting. THE ODYSSEY has been and will remain a story for the ages.
Posted by tvtv3 at 11:59 AM