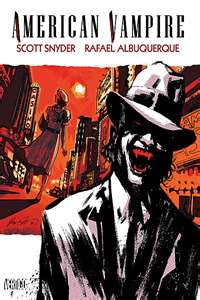 AMERICAN VAMPIRE VOLUME 2 begins eleven years after AMERICAN VAMPIRE VOLUME 1 ended. Like the previous edition, it’s split into two different stories. The first, “Devil in the Sand” takes place in 1936 Las Vegas. It introduces a new character to the saga, Cash McCogan, an officer for the Las Vegas police department. There’s a series of grisly murders happening in Las Vegas and Cash is convinced that Jim Smoke (aka Skinner Sweet) is somehow behind the crimes. The murders bring two agents from the Vassals of the Morning Star, a group of international vampire hunters, to Las Vegas who join McCogan in his investigation. However, things aren’t exactly what they appear to be and Cash finds himself in the midst of an alliance he could never have imagined.

The second story in the volume, “Way Out,” features Pearl and Henry. The two are now living as husband and wife. Like Sweet, Pearl is determined to find and eliminate the old vampires who have infiltrated the U.S. She and Henry have been living a fairly quiet life. However, there is a person from Pearl’s life who hates Pearl as much as Pearl hates the old vampires and this person is determined to make Pearl pay.

Overall, I thoroughly enjoyed AMERICAN VAMPIRE VOLUME 2. Recommended for those who have read the first volume as well as anyone who is a fan of Scott Snyder, those who enjoy interesting vampire stories, and those who like horror comics.
Posted by tvtv3 at 5:29 PM