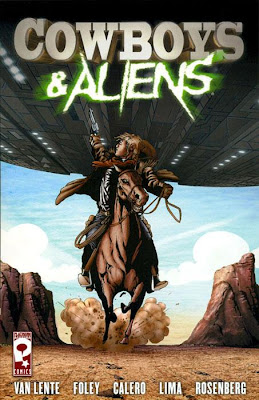 Two gunslingers, Zeke Jackson and Verity Jones, are hired to escort a caravan to Silver City, Arizona. On the way there, they are attacked by a group of Apache Indians. In the middle of the skirmish, an alien spaceship crashes into the dessert, ending the battle. The head honcho of the alien is a green-ugly named Rado Dar. He almost immediately eradicates some of the Indians and decides that if all of his confrontations are this easy, Earth will be an easy planet to conquer. While Dar is killing Indians, Zeke and Verity escape. The duo makes it to Silver City, only to discover that the town has been mostly abandoned since the silver mines were emptied.

Later, the cowboys are attacked by aliens and are chased off a cliff where they are rescued by some of the Apache Indians they ran into earlier. The cowboys join forces with the Indians to defeat the aliens. They form a plan of attack and find an unexpected ally in Dar’s assistant. Together this alliance fights together to keep Earth free from a planned invasion by Dar’s homeworld.

The title of COWBOYS AND ALIENS made me highly interested in reading this book. I like good Western stories and I like good sci-fi stories. I thought with a title like that, even if the story wasn’t that great, it would at least be interesting. Thankfully, it is a good story. There are a few clichés, but there’s also some originality. For instance, I liked the fact that one of the main cowboys is actually a cowgirl. There aren’t too many Westerns that include a strong female as one of the lead characters.

The only drawback with the comic I had is that the comic does a lot of browbeating to the reader with the comparisons between the evil aliens being like the settlers. It was a little offsetting, particularly in a comic entitled COWBOYS AND ALIENS. The good thing is that the soapboxing only lasts for a short while until the action gets going.

Though the title might sound hokey, COWBOYS AND ALIENS is a highly entertaining and enjoyable comic. It’s not difficult to understand why Hollywood was so eager to adapt it into a movie.
Posted by tvtv3 at 1:13 AM