THE WALKING DEAD, VOL. 2: MILES BEHIND US collects issues 7-12 of the “Walking Dead” comic book. The first part of the story (DAYS GONE BYE) introduced us to Rick Grimes, a small-town police officer who awakens from a coma to find the world he knew has been replaced by a world ruled by zombies. Rick set out to Atlanta to find his family and actually succeeded in being reunited with them. After having their camp attacked by a roving group of zombies, the group decides it would be best if they left and searched for a better, more stable place. That volume ended with the shocking murder of one of the lead characters by someone completely unexpected. 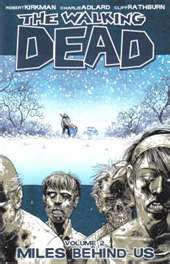 MILES BEHIND US picks up shortly after the events of DAYS GONE BYE. The group is burying one of their members and Dale informs Rick that everyone in the group wants him to be their new leader. Later the group is joined by three stragglers, Tyreese, Julie, and Chris. Together they try to find a place to weather through the winter. Lori reveals to everyone that she is pregnant. First they believe they’ve found safety in walled subdivision called Wilthshire Estates. The next day they discover the place is overrun by lurking zombies and are attacked. The group barely escapes, but not without suffering casualties. Another featured member is shot by a hunter in the forest which leads to Rick’s group meeting up with the family of Hershel Greene on his farm. At first, Hershel’s farm seems like a perfect location to start a new life and rebuild society. However, Hershel is quite convinced the world has changed so much and the old barn on his property contains a secret.

Tyreese and Hershel’s family are an interesting addition to the group of survivors. Both men have similar personalities to Rick, but both men have some very different views and beliefs about particular things. For example, Tyreese is more forceful than Rick, but suffers from the same temptation as the Biblical Samson; women cause him all kinds of trouble. As for Hershel, the way he reacts and handles is much different than the way Rick and Tyreese and the other survivors do, but it illustrates how not everyone has reacted to the zombie outbreak in the same way. Both Tyreese and Hershel become key members of the group and the events that unfold in this volume have ramifications that influenced the series for dozens of issues.

I really enjoyed DAYS GONE BYE, but I felt that MILES BEHIND US was an even better volume. There are a couple of brutal zombie attacks/outbursts, but this volume even more so than the first, really explores the characters and their relationships with each other. Rick is now established as the overall protagonist, so the story is able to focus more on other characters. Also, I really enjoyed the introduction of the new characters, Tyreese and Hershel. Kirkman could have had the group meeting a couple of groups of evil survivors, but instead from the outset had these three groups of “good” survivors meet each other. It’ll be interesting to see what happens when they meet a group of “evil” survivors.
Posted by tvtv3 at 10:55 PM