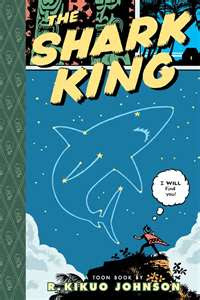 Written and illustrated by R. Kikuo Johnson, THE SHARK KING is a Toon Book loosely based upon a Hawaiian myth. A woman named Kalei falls into the ocean and is saved by a handsome young man. They fall in love and are married and soon Kalei is pregnant. The night before their son is born, her husband runs away and she discovers a secret he has been keeping from her: he is the Shark King. The next day, their son, Nanaue is born. Nanaue grows at an incredible rate and has a voracious appetite. His mother soon discovers he has a shark mouth on his back and he can swim like no other creature in the sea. Nanaue begins stealing fish from fisherman just before they are netted.  This leads to trouble for Nanaue.

I was unfamiliar with the myth of Nanaue before reading THE SHARK KING. After reading the book, I did some research and discovered that Johnson portrays Nanaue in a much more favorable light in THE SHARK KING than according to the Hawaiian myths (in the original stories, Nanaue develops a taste for human flesh and kills people and is eventually captured and killed himself). This version of the myth works for a graphic novel geared towards young children. Instead of being a creature to be feared and hunted, in THE SHARK KING Nanaue is portrayed as a playful and mischievous child who the reader comes to emphasize with.

The art in THE SHARK KING is graceful and seeped in Hawaiian influence. The illustrations aren’t overly cartoonish, nor or they too realistic.