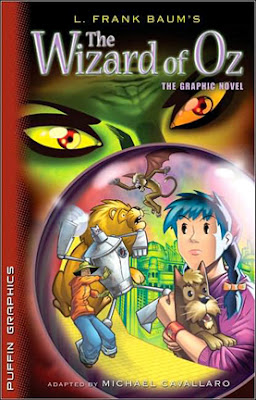 Published by Puffin Books and adapted from L. Frank Baum’s classic American fairy tale, Michael Cavallaro has placed the story in a more contemporary setting and drawn this graphic novel version of the story in a magna-style. Dorothy, Scarecrow, and the Tin Woodsman don’t look like they do in the usual adaptations of the story. In this version of the story, Uncle Henry and Aunt Em don’t live in a farm out in the Kansas prairie, but in a contemporary suburban-style home in a Kansas city. The Scarecrow is dressed in baggy jeans and a hoodie while the Tin Woodsman looks like a rejected robot from an old Japanese cartoon.

In terms of story, this adaptation follows Baum’s story rather well except it completely deletes the chapter of the Dainty China Country. Cavallaro isn’t the first to do this and he won’t be the last. Personally, even though that chapter has an odd feel to it compared with the rest of the story, I find it’s one of the more humorous parts of the story: there’s a ton of comedy going on.

Personally, I like Marvel’s graphic novel adaptation of the story better. However, this one isn’t bad. Reluctant leaders might enjoy the book as well as anyone who enjoys classic literature and magna.
Posted by tvtv3 at 11:54 PM