Taking place immediately after the events of the previous volume, SAFETY BEHIND BARS, WALKING DEAD, VOLUME 4: THE HEART’S DESIRE collects issues 19-24 of “The Walking Dead” comic books. The book opens with a prologue of sorts and features a hooded woman with katanas and a couple of chained jawless zombies behind her following the sound of gunshots. The shots come from Hershel’s son Otis, who remained on the farm to take care of the animals, but is now headed towards the prison for safety. He’s surrounded by zombies, but with the woman’s help, they are able to fend them off. The woman is Michonne and she will become a major character in the ongoing storyline. 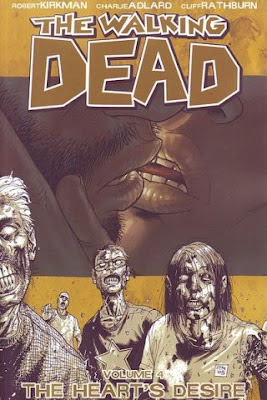 Meanwhile, back at the prison, Dexter, one of the former prisoners, has given Rick and his crew an ultimatum: leave or be shot. However, Dexter’s companions aren’t as intelligent as he is and they didn’t close and lock the prison doors after getting weapons from the armory. That forces Rick’s group and the prisoners to join forces to fight back the swarming zombie hordes. In the confusion of the firefight, Rick shoots Dexter in the head. Tyreese sees this happen, but keeps silent. Shortly after, Otis and Michonne arrive at the prison and Michonne asks if she has earned a place with the group. Rick agrees, but only if she agrees to temporarily give up her katanas and kill the zombies on chains. The rest of the book deals with the drama that has been boiling up among the group for several issues back. This volume concludes with a hard-core fight between two core members, a changeup of the group’s leadership, and the declaration that the real walking dead are actually the living humans.

THE HEART’S DESIRE moves at a slightly different pace than the previous volumes in “The Walking Dead” series. There’s not as much action as in the other volumes and, like SAFETY BEHIND BARS, almost the entire story takes place at the prison. The overarching story arc is focused more on the interpersonal relationships of the characters and there’s a lot more soap opera-type drama that happens. The main thing that makes THE HEART’S DESIRE stand out is that it is the volume that introduces Michonne.

Overall, THE HEART’S DESIRE contains more drama and not as much action as the previous volumes in “The Walking Dead” series. However, despite the soap opera feel through much of the book, the introduction of Michonne and the fight between two of the characters makes the book a worthy entry into the series.
Posted by tvtv3 at 6:12 PM