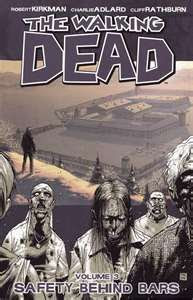 At the end of MILES BEHIND US, Rick Grimes and his group of survivors come across a prison. Rick firmly believes that once it’s cleared, this place behind bars can be their new home. Featuring issues 13-18 of the “Walking Dead” comic book, the book begins where the last issue left off. Rick’s group is outside the prison, making plans on how to make the prison safe. They begin by clearing the outer fence of the prison. Once this is accomplished, the group moves inside and begins clearing and cleaning up. They discover the cafeteria has been barricaded by a police baton. Upon bursting in, they discover not a room full of zombies, but four men. The men, it turns out, aren’t guards, but former prisoners who have been trapped inside for over a month since the outbreak. There’s some tension at first, but the group forms an uneasy alliance as they work together to clear the prison and make a home. However, a horrendous crime destroys the fragile bound between the groups and Rick and his group discover that the biggest threat to their survival isn’t the walking dead, but other people.

The setting for each volume of “The Walking Dead” has largely been in a different location. DAYS GONE BYE mostly took place in and around Atlanta, particular the survivor camp that Shane established. MILES BEHIND US mostly took place at Hershel’s farm. SAFETY BEHIND BARS begins a long stretch for the series with the prison setting. One would think that with a semi-stable environment, things would slow down for the characters, but the opposite occurs. The real threat for human existence isn’t really the zombies, but other humans. This is the lesson that Rick and company learn in SAFETY BEHIND BARS and (from what I’ve heard about the rest of the series) the conflict with other humans becomes the focal point of the series from here on.

In one of my college literature classes, the question of absolutes would often be raised as students would often say there’s no such thing as absolutes. I had a professor who whenever someone would say this would say, “Who here believes that babies should be burnt with cigarettes?” No one ever agreed with that statement and no one ever tried to justify how and when it would be okay to burn babies with cigarettes. That is an example of an absolute. SAFETY BEHIND BARS illustrates this concept even better. Despite living in a world gone mad where the dead wish to eat the living, there are things that are absolute. SAFETY BEHIND BARS examines some of these absolutes and ascertains between some that are truly absolute and some that are not. Rick and company arrive seeking safety behind bars, but by the end of the volume fully realize that there just might not be such a thing. It’s a riveting chapter that, like the previous volumes, ends on a cliffhanger. I can’t wait to find out what happens next.
Posted by tvtv3 at 10:56 PM