Even though “The Walking Dead” comics have been published for years, I hadn’t read any of them until I learned about the AMC series that was being helmed by Frank Darabont. At the time, I still had this strange habit of wanting to be familiar with the source material before watching an adaptation on the screen. I’ve never been a huge fan of the horror genre, but at the time I was on a bit of a horror-kick and had just read a bunch of the old EC Comics as well as Stephen King’s nonfiction horror treatise, DANSE MACABRE. That’s the state of mind I was in when I first read THE WALKING DEAD, VOLUME 1: DAYS GONE BYE. However, even if I hadn’t been on a horror-kick, I think I would have found the book fascinating because of the fascinating premise and the great storytelling. 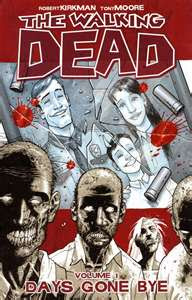 THE WALKING DEAD, VOLUME 1: DAYS GONE BYE follows Southern police officer Rick Grimes. Rick was involved in a traffic job gone bad and ended up in the hospital in a coma because of it. When he awakens, he finds that the hospital is deserted. There’s no one around. There are several dead bodies and half eaten corpses, but no people. Oh, and the cafeteria is full of zombies. While facing the shock of the situation he’s in, Rick discovers that his family is missing and other than a bunch of zombies, the town is deserted. After being knocked unconscious by a squatter living in his neighbor’s house, the events of how the world changed are revealed to Rick. A zombie infection has swept the world and the walking dead now rule. Most people in the area fled to Atlanta where the government said they would be safe. Rick travels to Atlanta to seek his family and discover if they are still alive.

Usually, even the most-cliché-riddled zombie story can be entertaining; there’s nothing quite like reading about or watching a group of survivors trying to fend off a massive horde of the undead. However, THE WALKING DEAD really isn’t about zombies. The series is about the normal humans and how they react to the horrible extraordinary circumstances around them. A zombie apocalypse is a very extreme situation. It allows for both the best and the worst of humanity to be displayed. DAYS GONE BYE is a perfect example of that. Rick literally awakens to a world gone mad; the citizens he risked his life protecting before he went into a coma are now trying to kill him and eat his internal organs. His wife and son are missing and other than a vague heading, he doesn’t know where they’ve gone. In DAYS GONE BYE, Rick is an example of the best that is in humanity. It remains to be seen how the constant strain will affect Rick. Also, DAYS GONE BYE doesn’t even touch how such extreme circumstances can bring out the worst in humanity (from what I’ve heard, that comes later in the series). Despite these variables, DAYS GONE BYE introduces a wonderful group of characters and sets the stage for a great saga set against the backdrop of a zombie apocalypse.
Posted by tvtv3 at 12:58 AM